When A Greek Goddess Protected Her Being Going for long walks has always been my passion. As usual, I was walking through a thick green forest when I heard that voice. I thought it was a bird. I kept walking, but the voice sounded again. I grew tenser now. Curiosity got the best of my scruples, and I decided to follow the voice.

It led to a hidden door. I would have passed through it a thousand times but never noticed it. I sceptically stepped through the doorpost and entered the world as fit as fantasy.

The grass was fresh, and a million trees made it all submerged in green. A glittery lake stood proudly under the waterfall. It looked like a place straight out of a Greek Legend.

My eyes were a little more immune to the plush green sight by now, and I noticed a figure. Actually, dozens of them by the lake. Their tanned brown skin, green hair, sultry fragrance, and magical aura made them appear beyond superhumans.

The more I got closer, I could spot thousands of them. They all looked like Wood Nymphs. Wood Nymphs? I recalled they were the wood and forest spirits and guardians. They couldn’t be Wood Nymphs. They were just legends.

Gradually, they all started to crowd around a slumped figure. It was the most beautiful woman I had ever seen in my life. Her hair was a beautiful colour of blue waters, her body was covered with different shades of greens, but her feet dug the Earth.

She turned towards me. Her emerald green eyes staring into my soul. She muttered in a strange language, which I could surprisingly understand. She spoke Greek, “Demeter, I am Demeter,” she said.

I was too awestruck to answer. I was standing right in front of one of the most powerful Greek Goddesses. I was talking to mother Earth herself. I realized that even a little bit of movement was causing her immense pain.

She spoke again. Her voice as smooth as the flowing river and said, “I am fading.” She then turned towards the mass of stone, and I found myself on the same spot where I heard the voice. I was scared and ran back home.

I couldn’t sleep for the entire night. I did not know how to save those emerald green eyes and my own being. The next day, I wrote this with only two words as my inspiration. Save my mother Earth so that you can stand safe. Protect the Earth from destruction, and she will protect you too!

Photo by Alex Iby on Unsplash 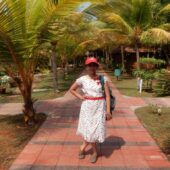 Suhaani is a student, who loves literature and is passionate about writing. While she is busy writing stories and articles, she is also evolving as a writer